Which beast wins?
The one you feed will. 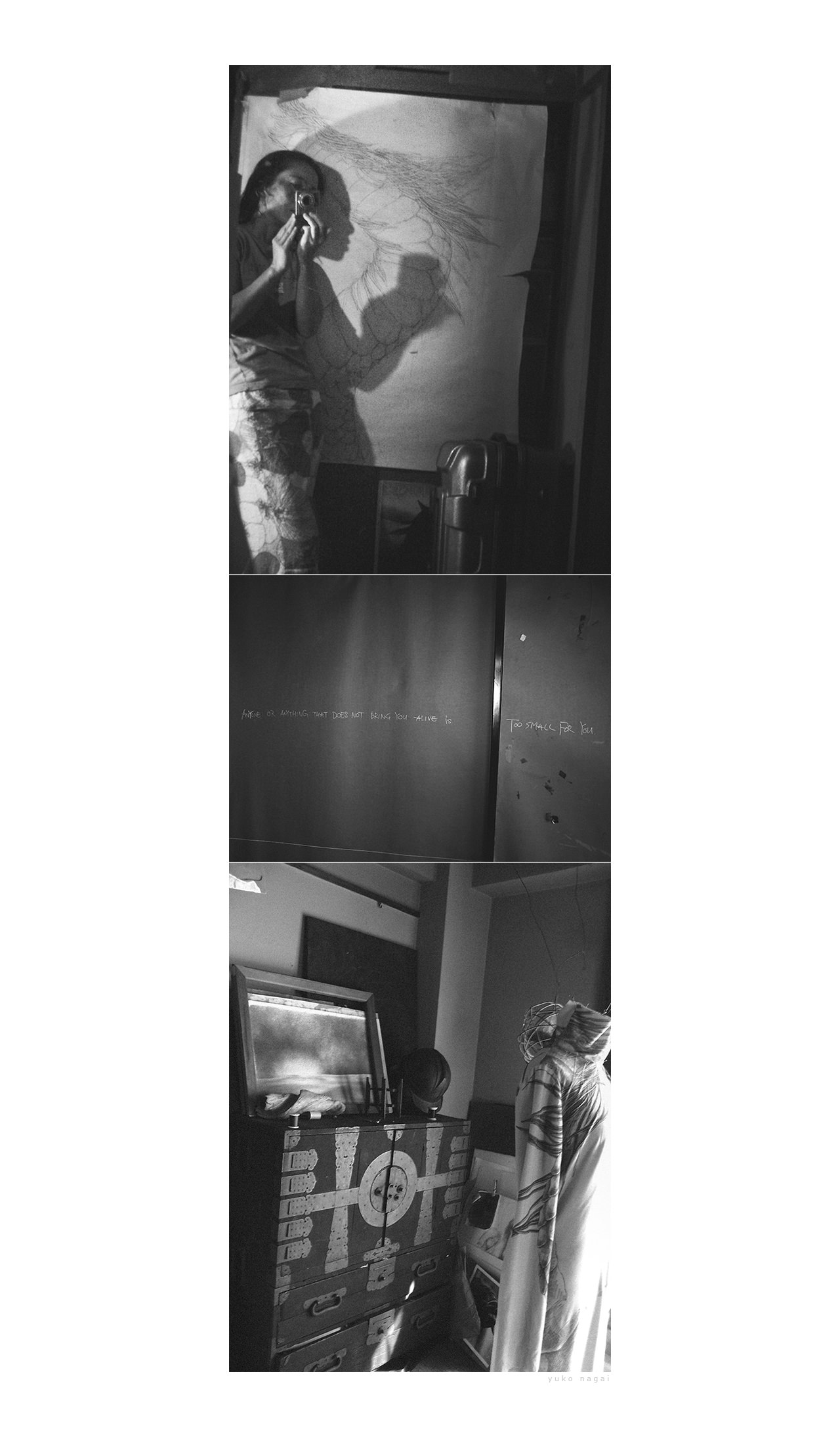 Making the invisible, visible. Kawasaki, Japan.
Both the drawing and the prototype are Aqua Dragon Dress 2 in its early formation. 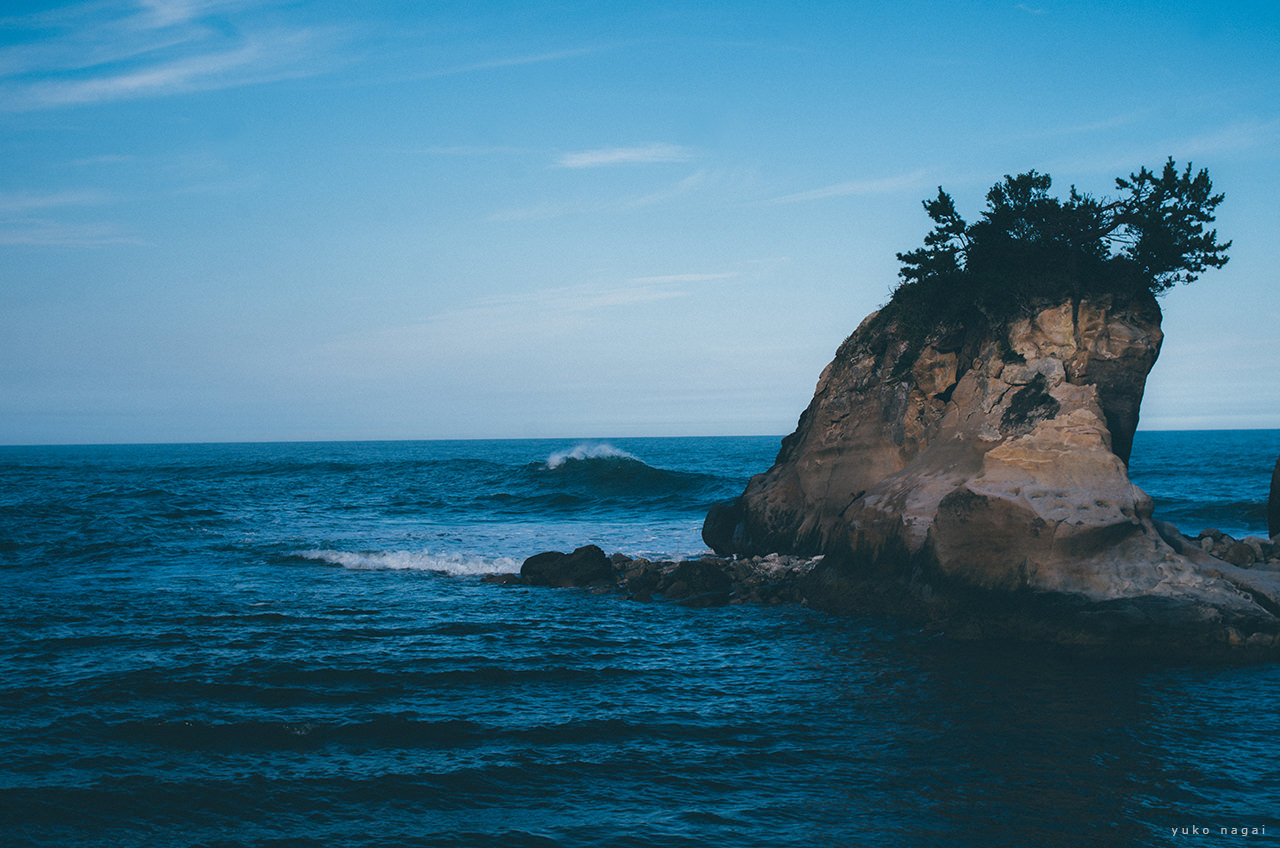 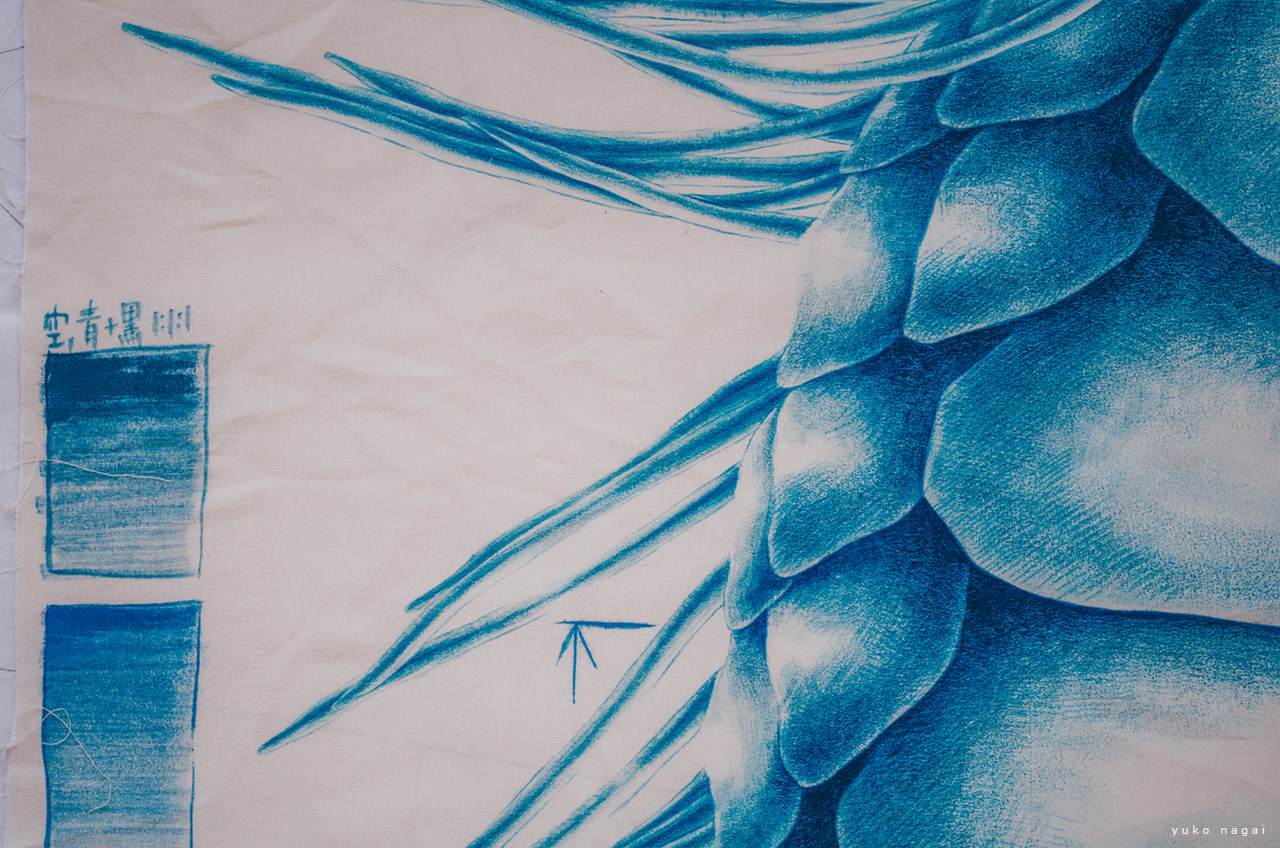 (yet another) Recap: a dye test for Aqua Dragon Dress (2006).
And a photo of a cool place near my house just yesterday, probably to be the last sunny day of August. 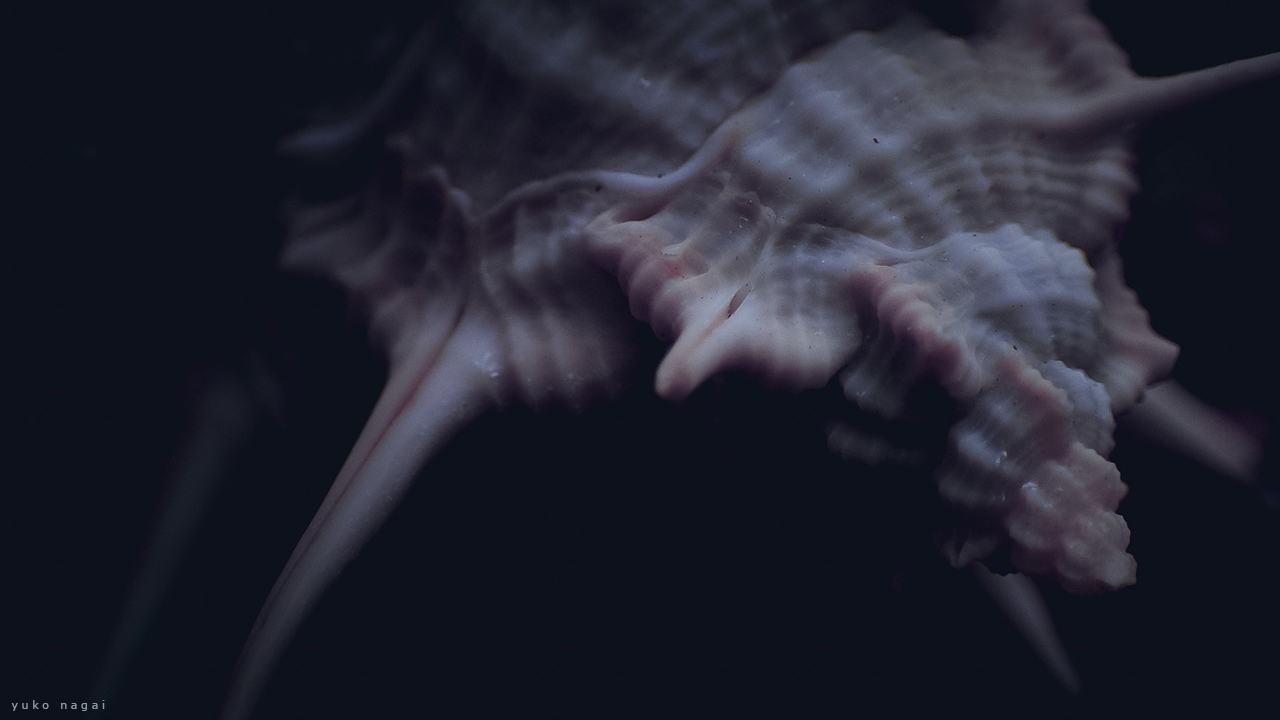 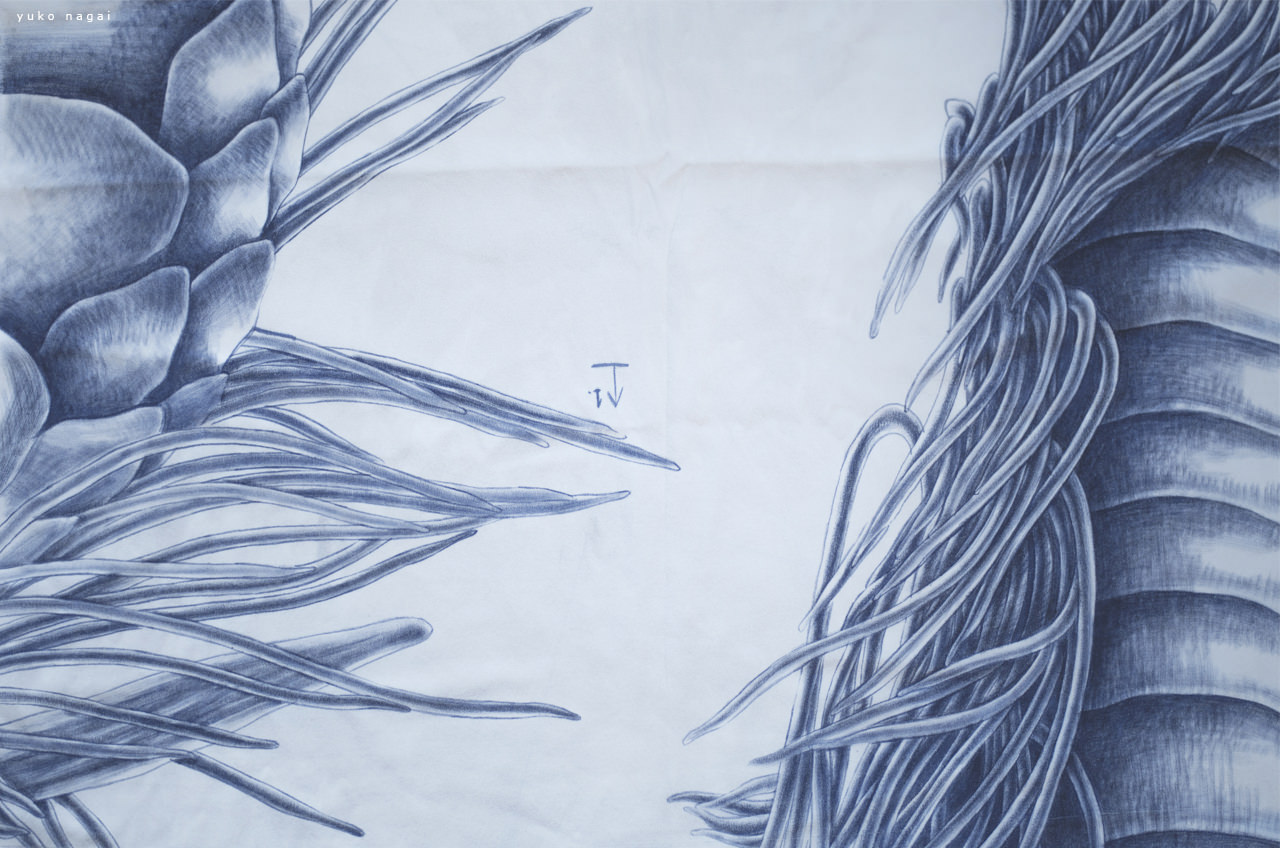 Recap: a dye test for Dyed Dragon Series, January 2006.
And a souvenir shell from a trip to Shizuoka Prefecture earlier this month. 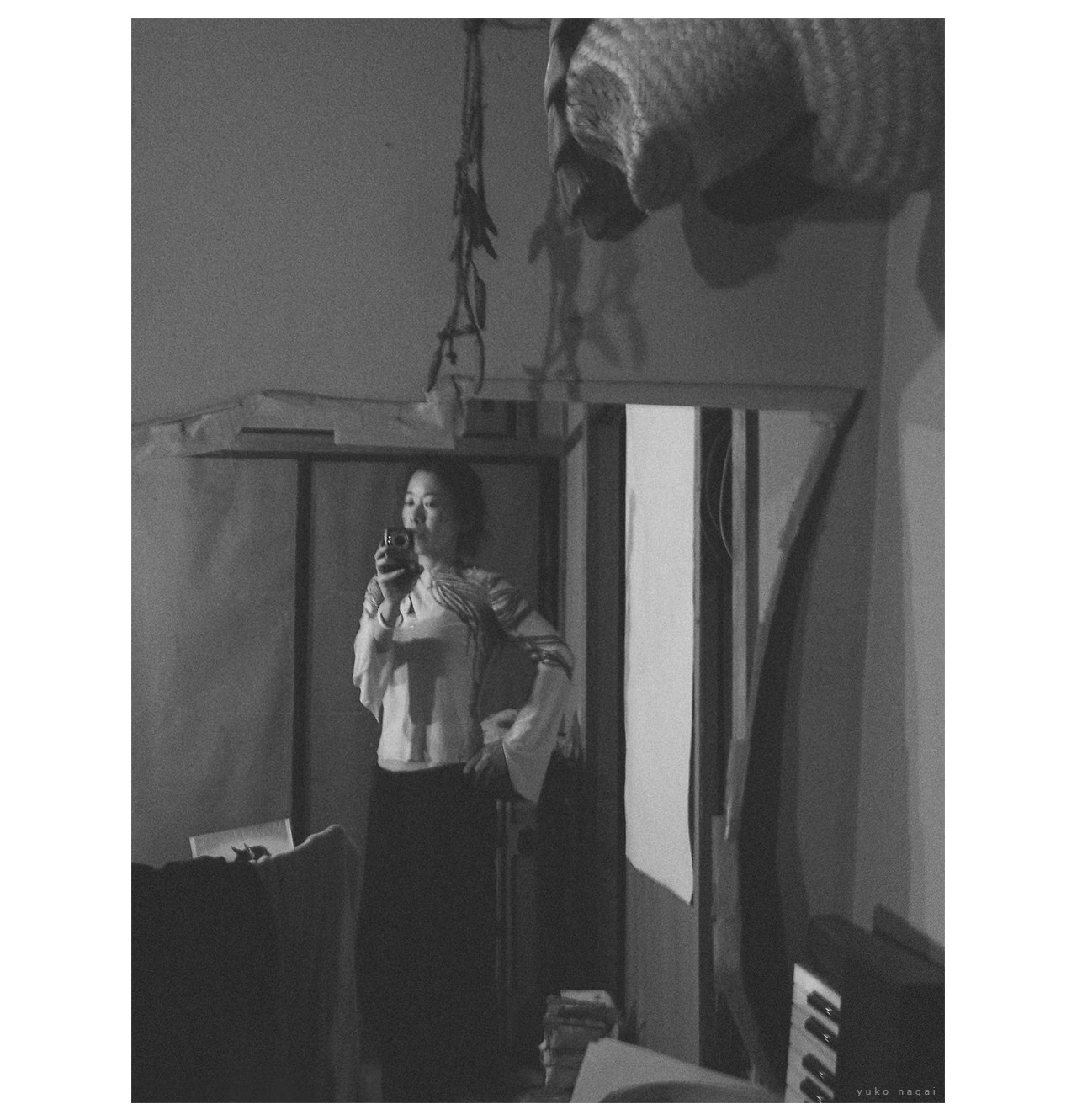 “Is it ‘flowing’?”
Yours truly, trying on one of her prototypes, which, a year later, became a piece called “Aqua Dragon Dress 2”. What she’s standing in is called “pre-relocation mess”.
Autumn 2005, Kawasaki, Japan. 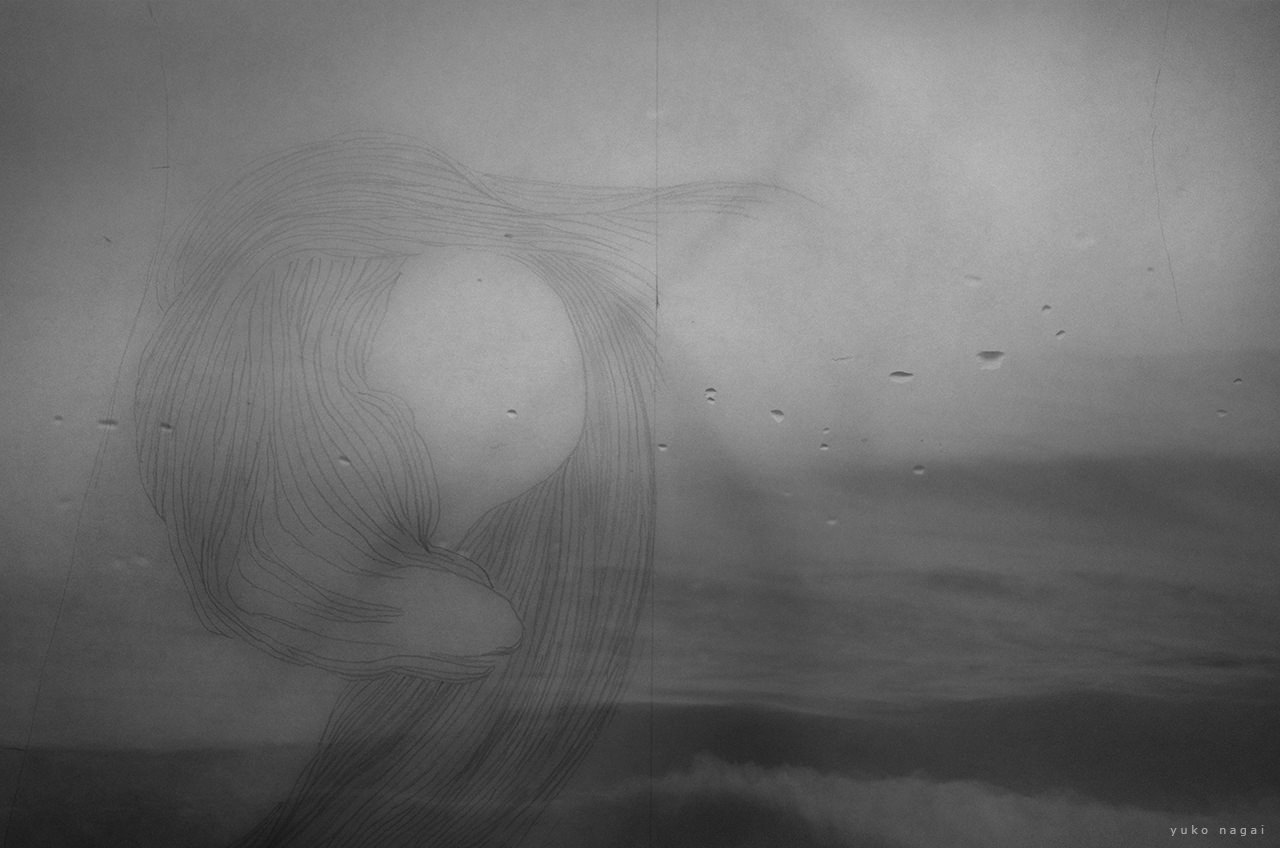 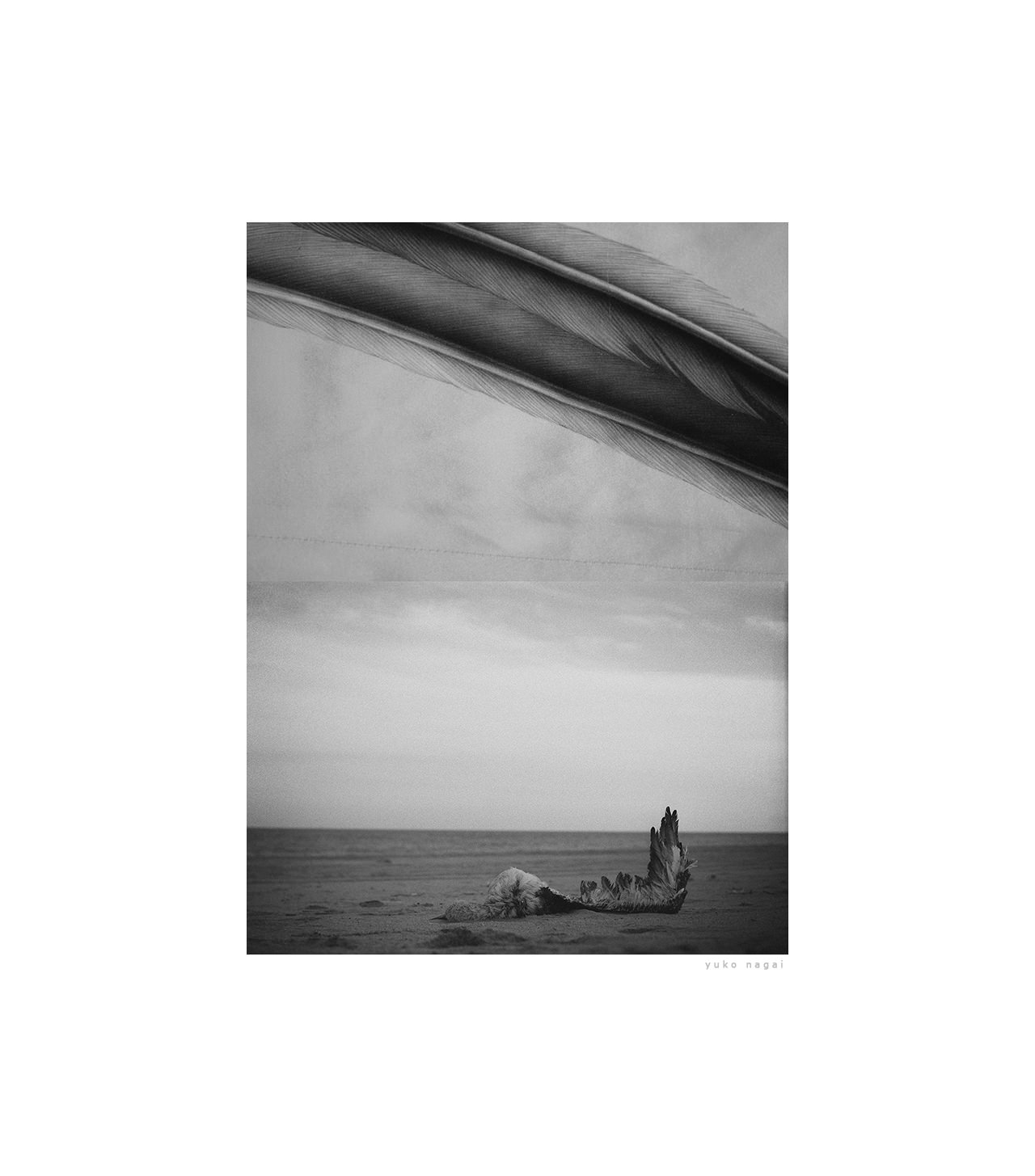 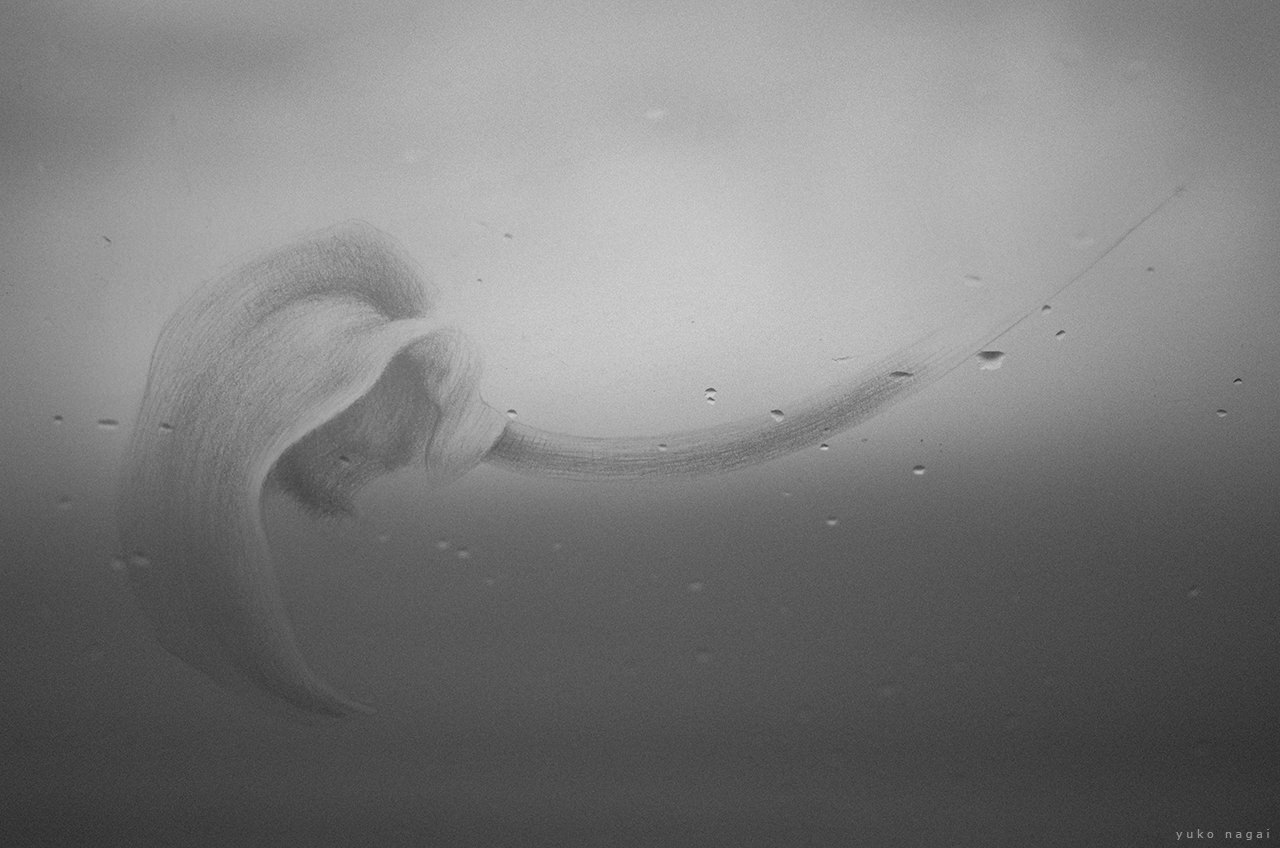 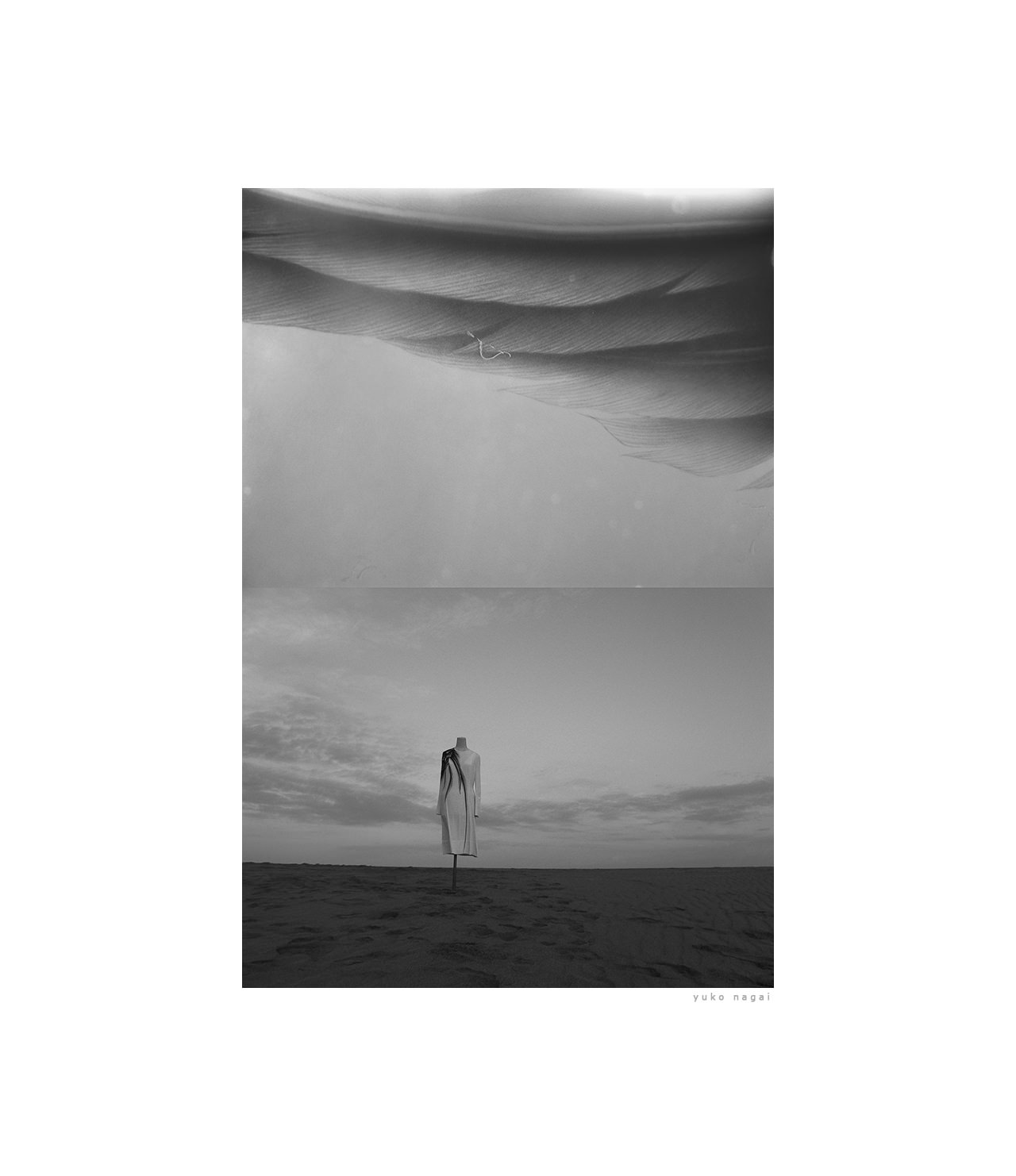 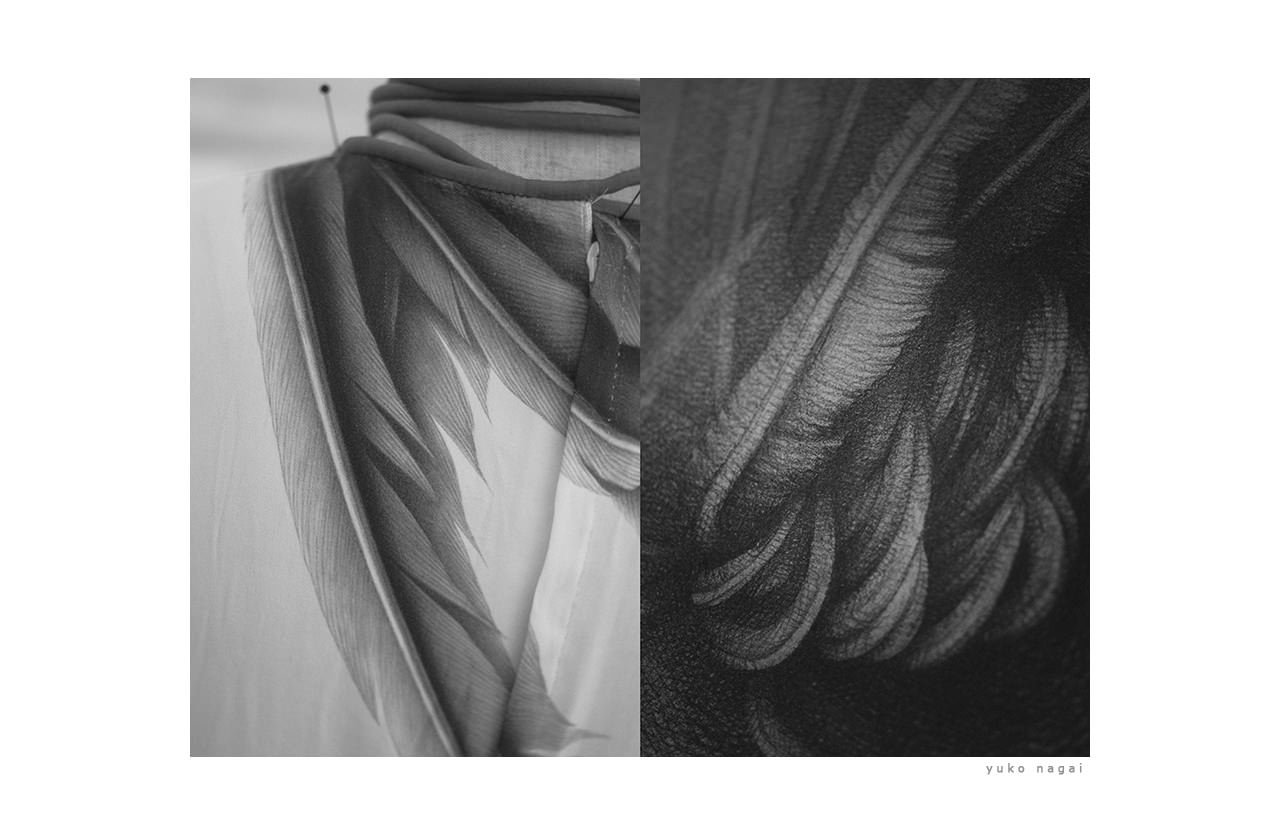 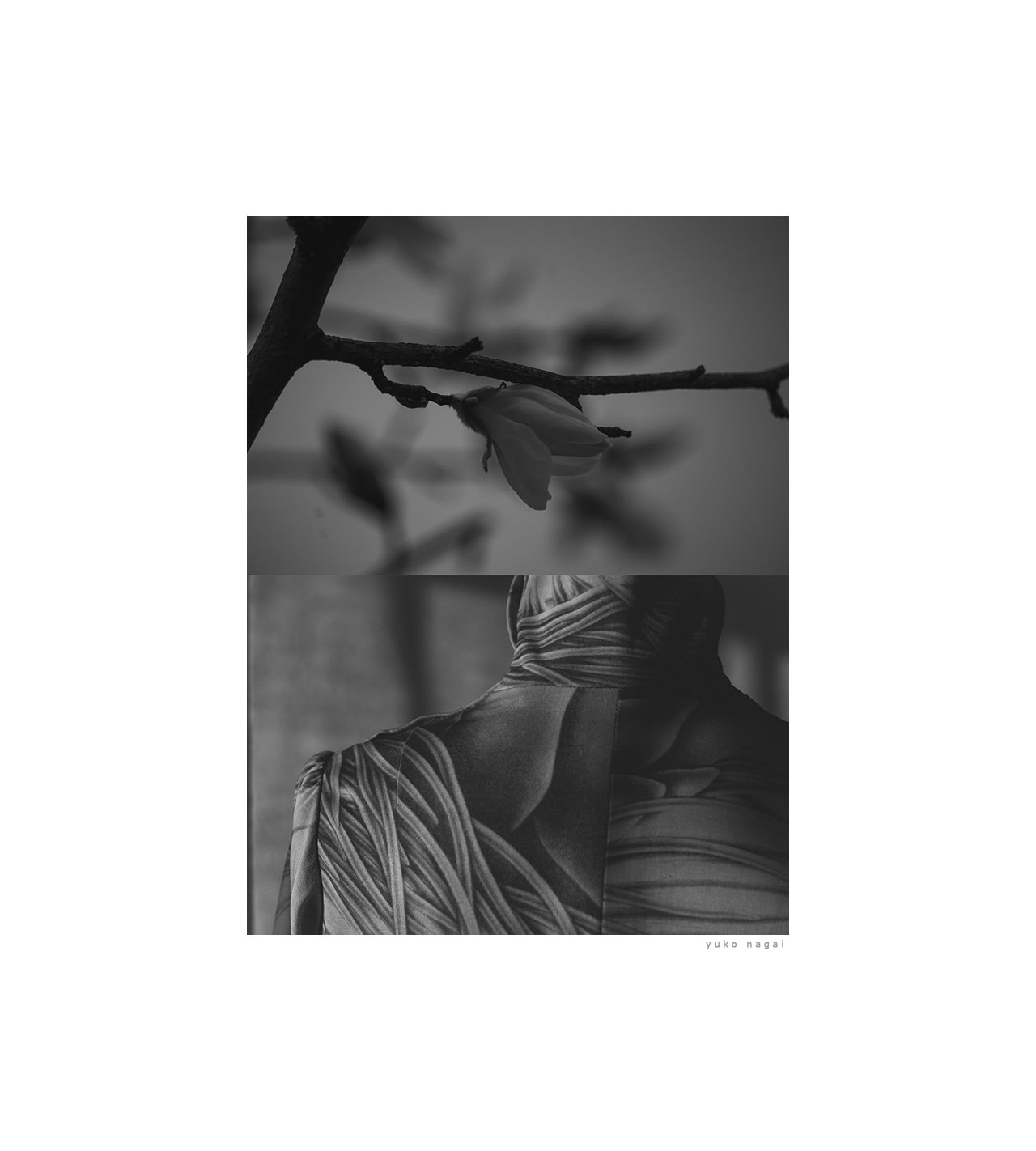 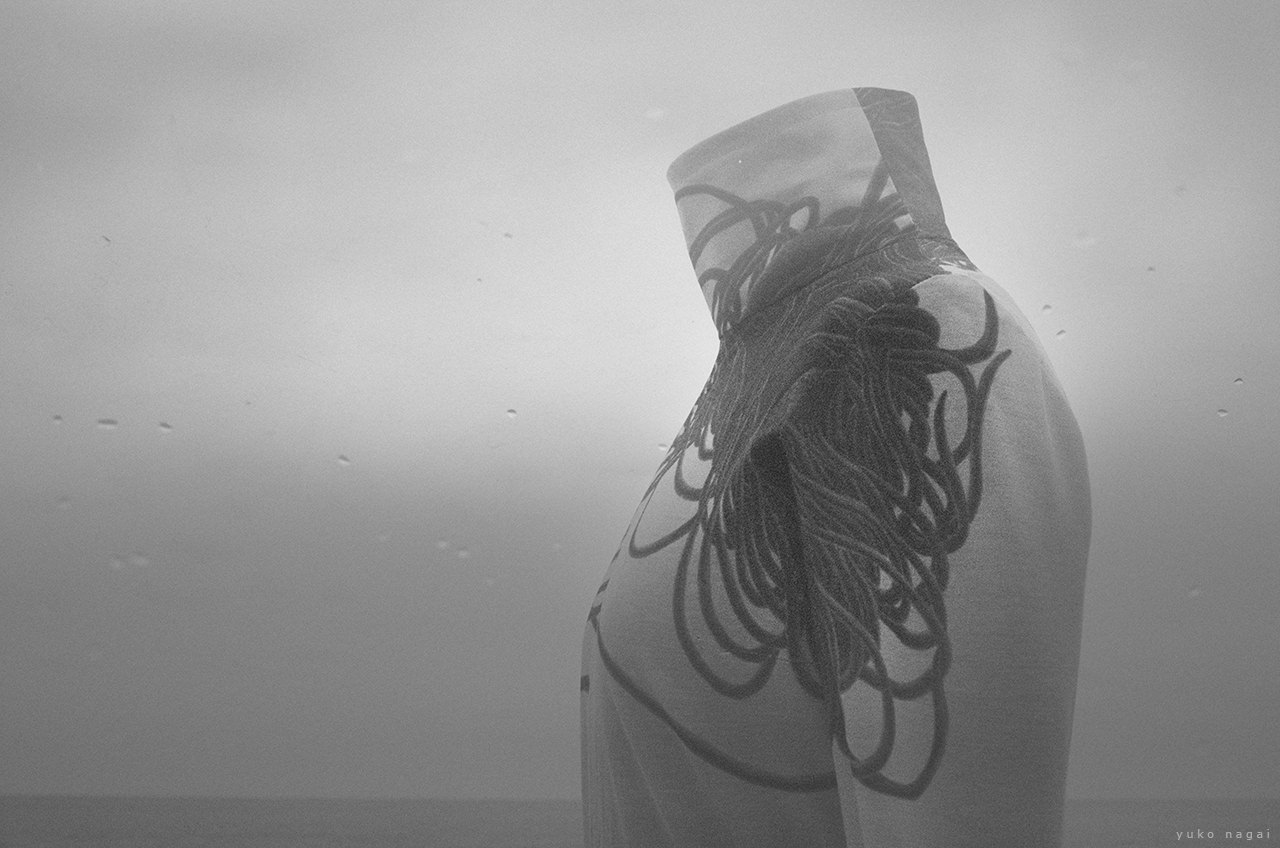 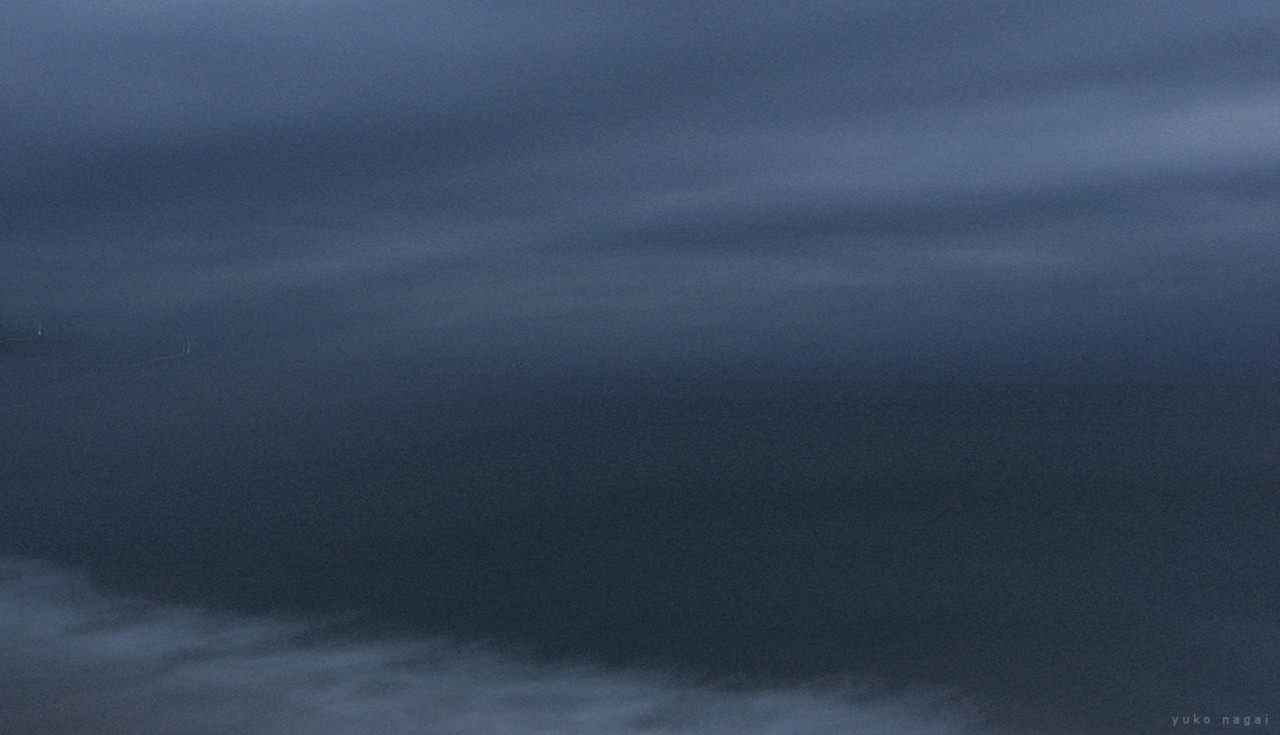 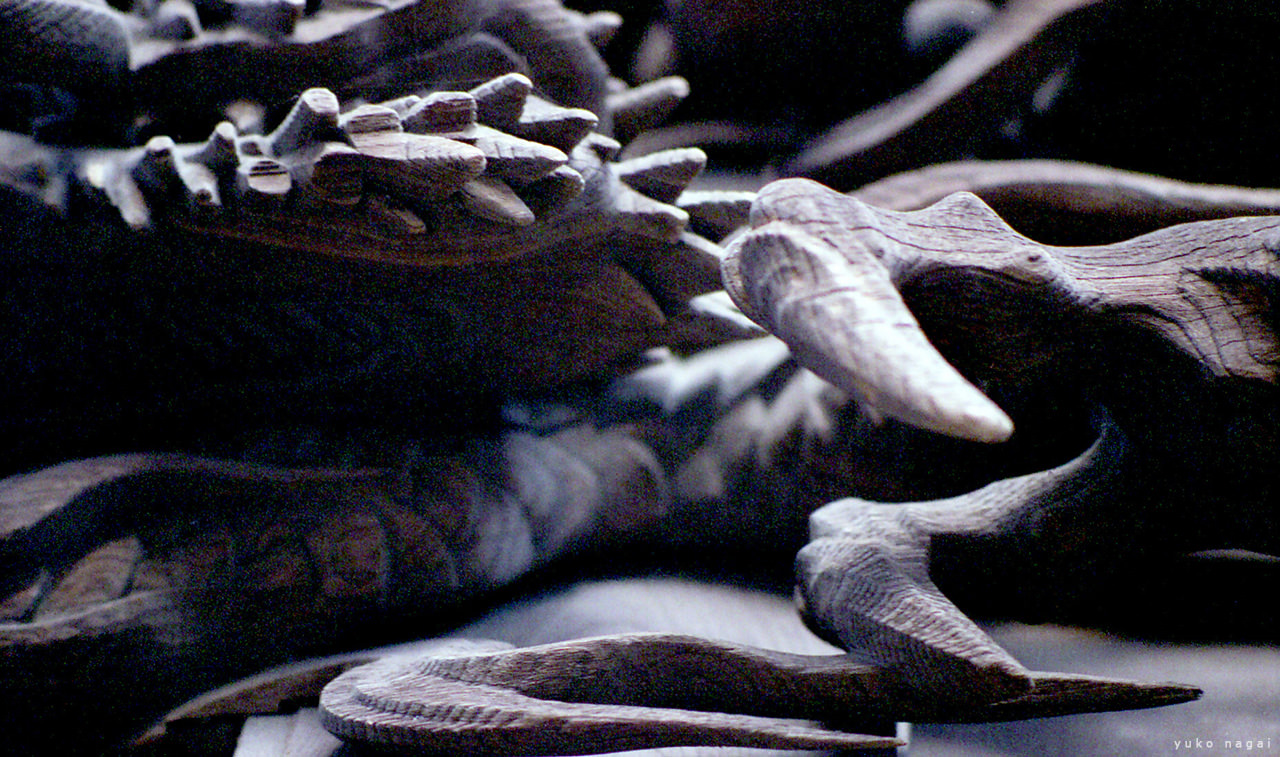 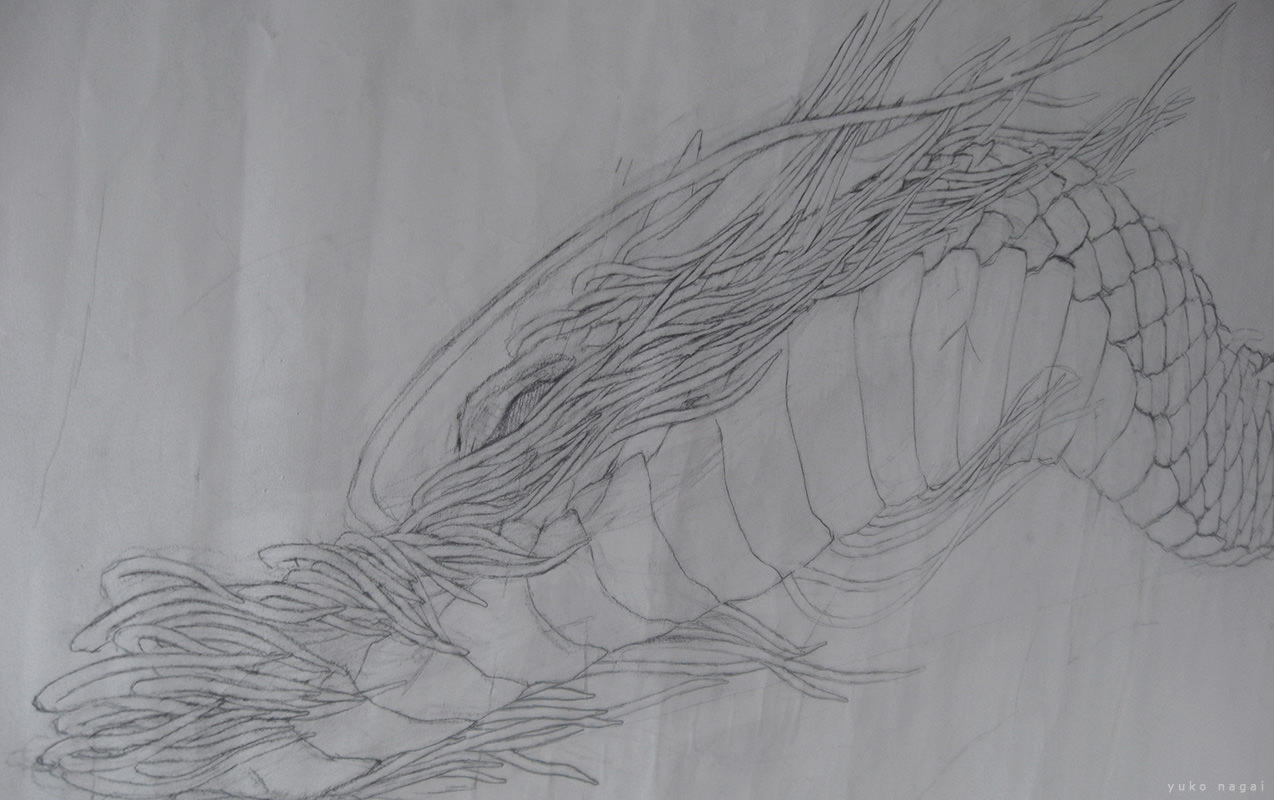 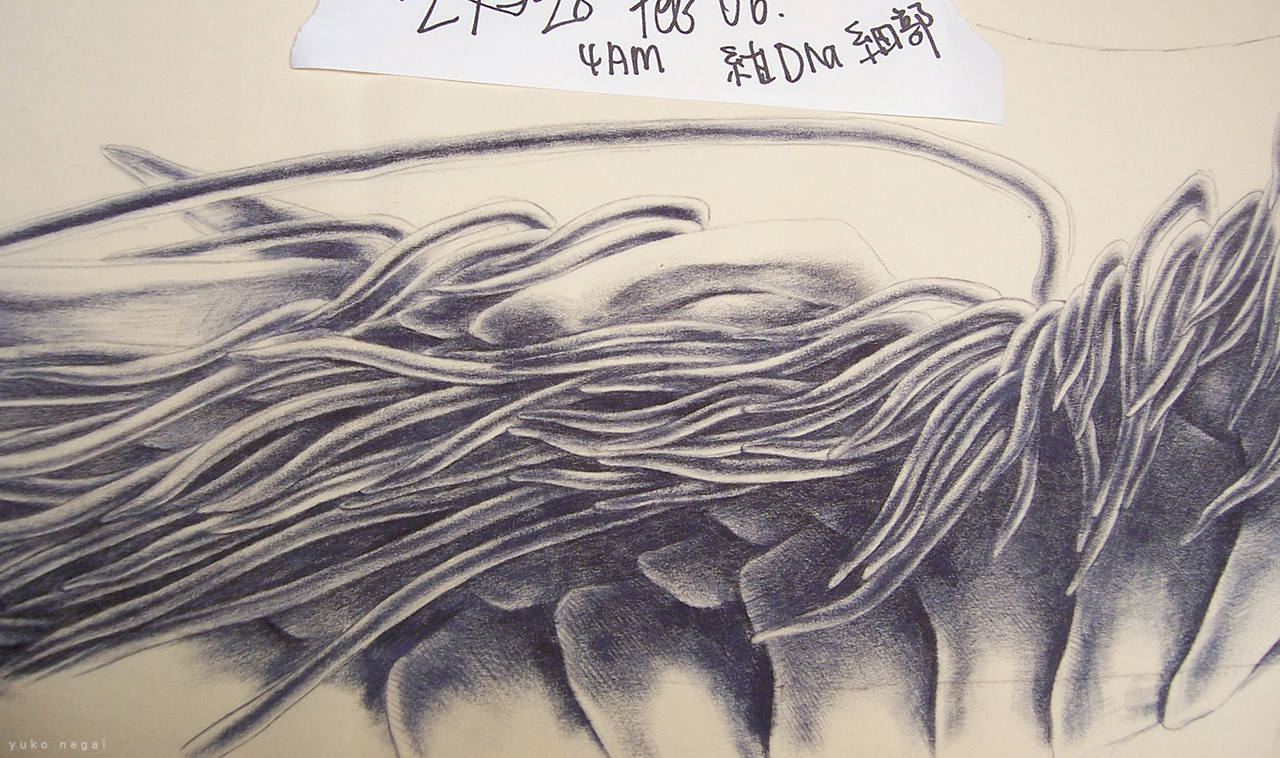 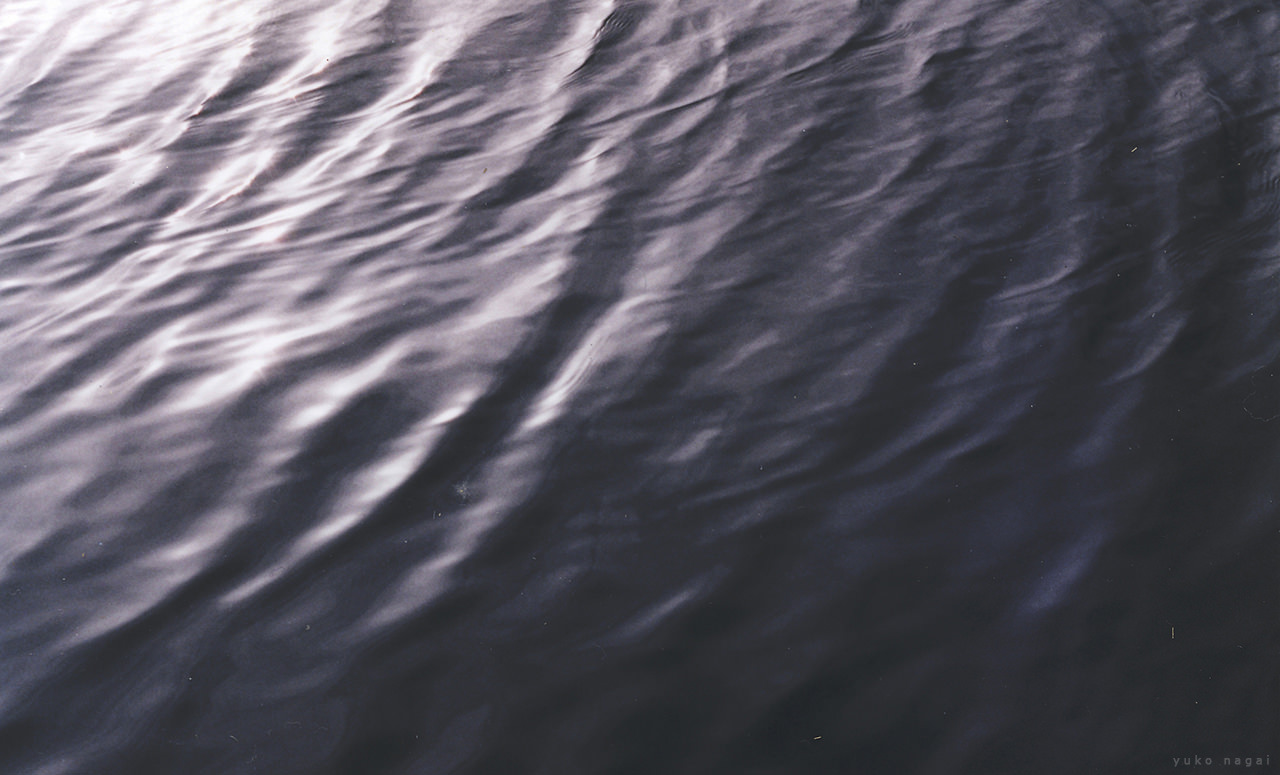 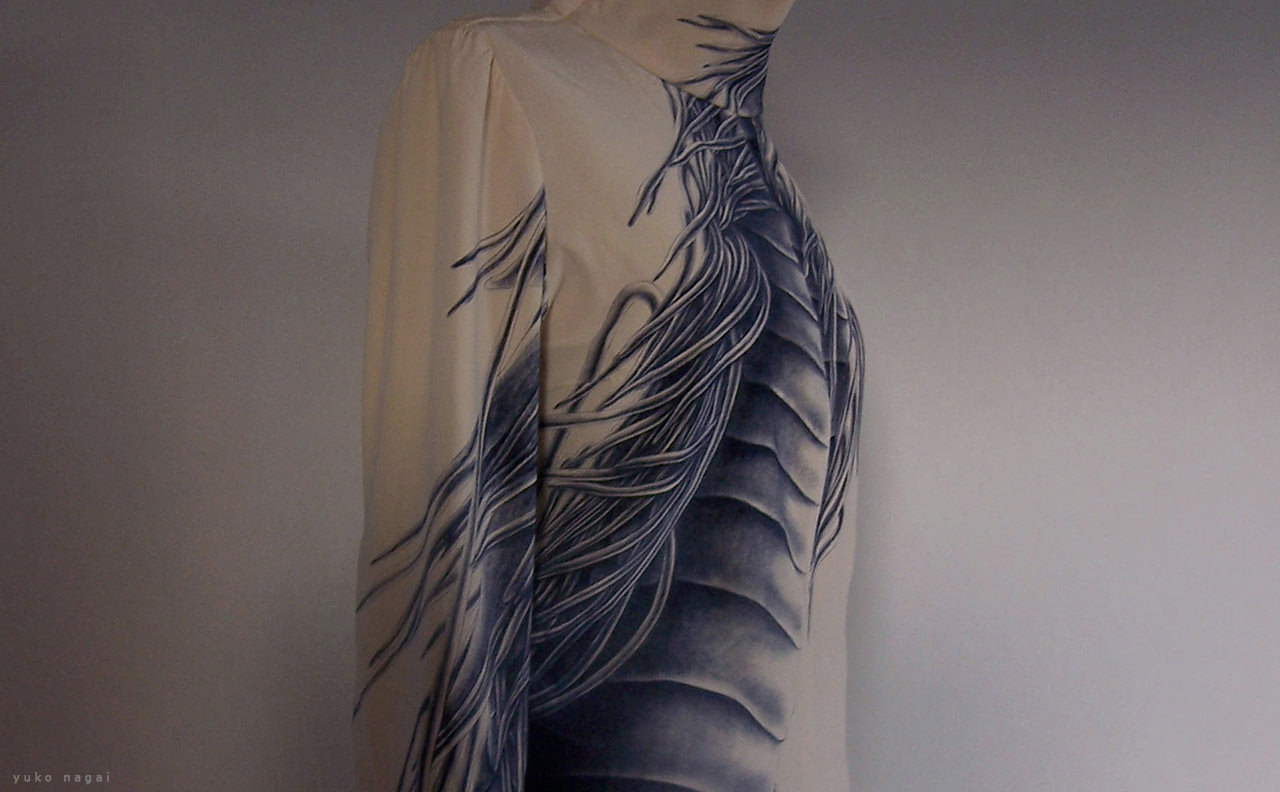 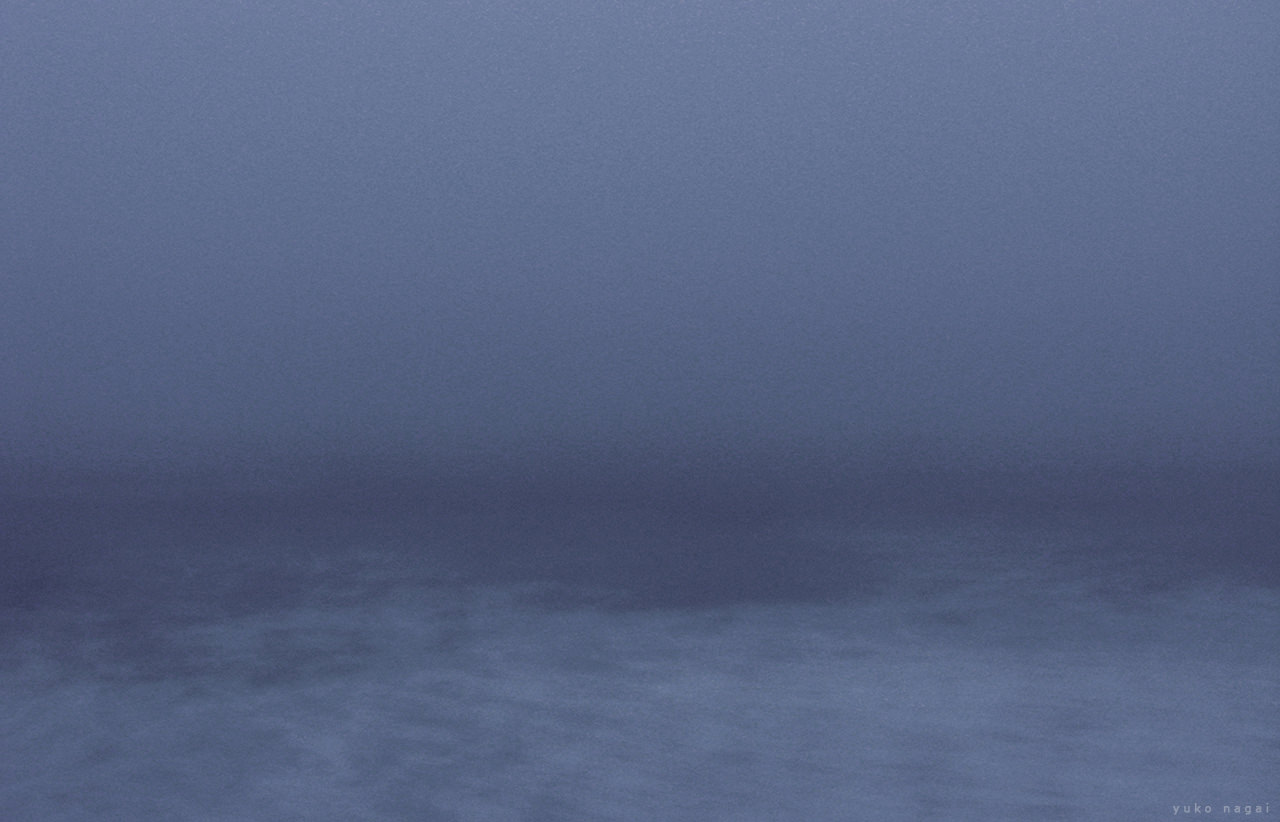 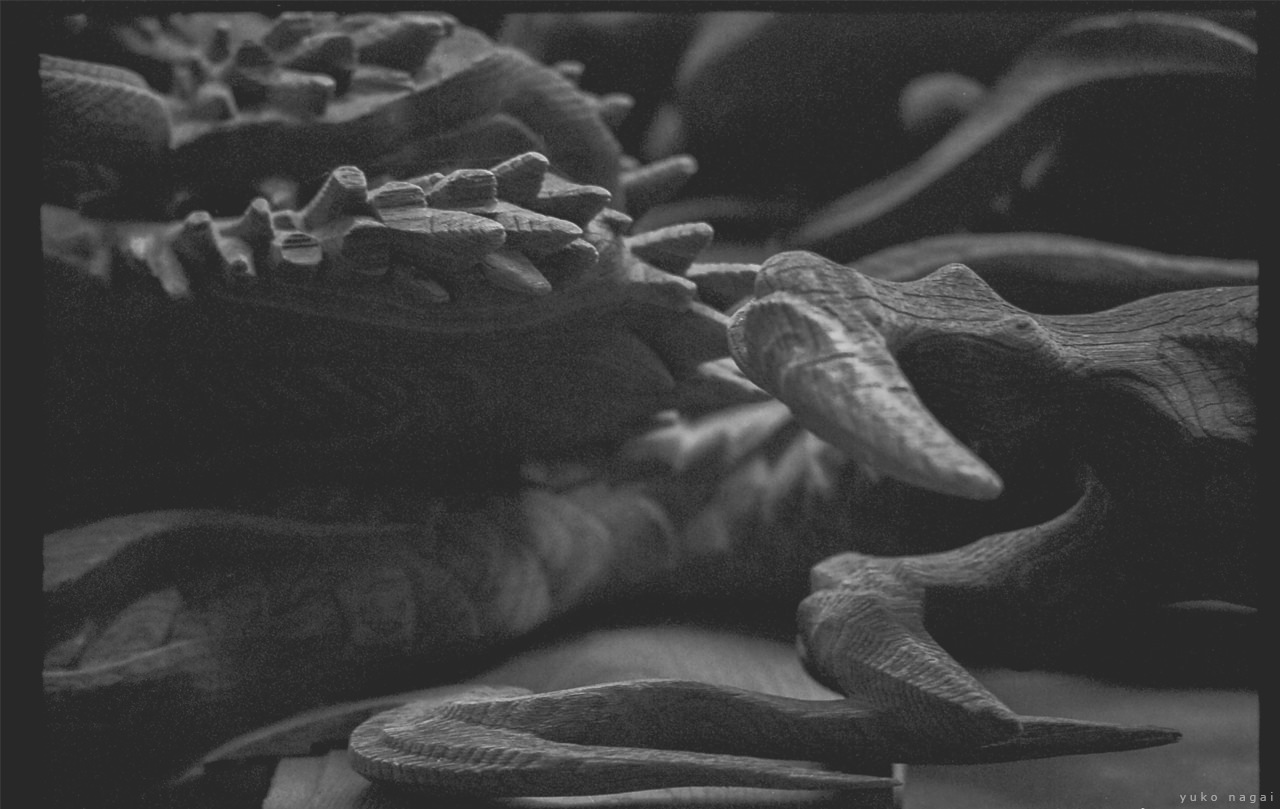 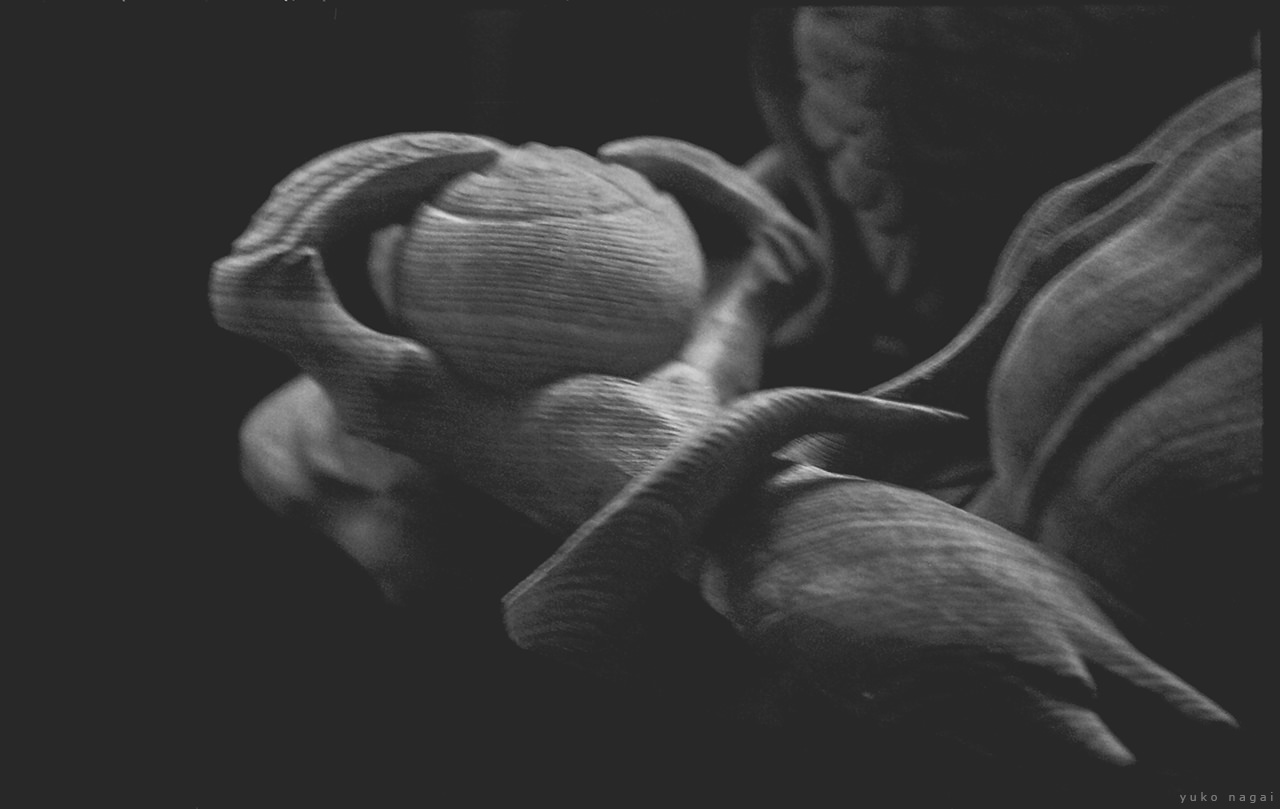 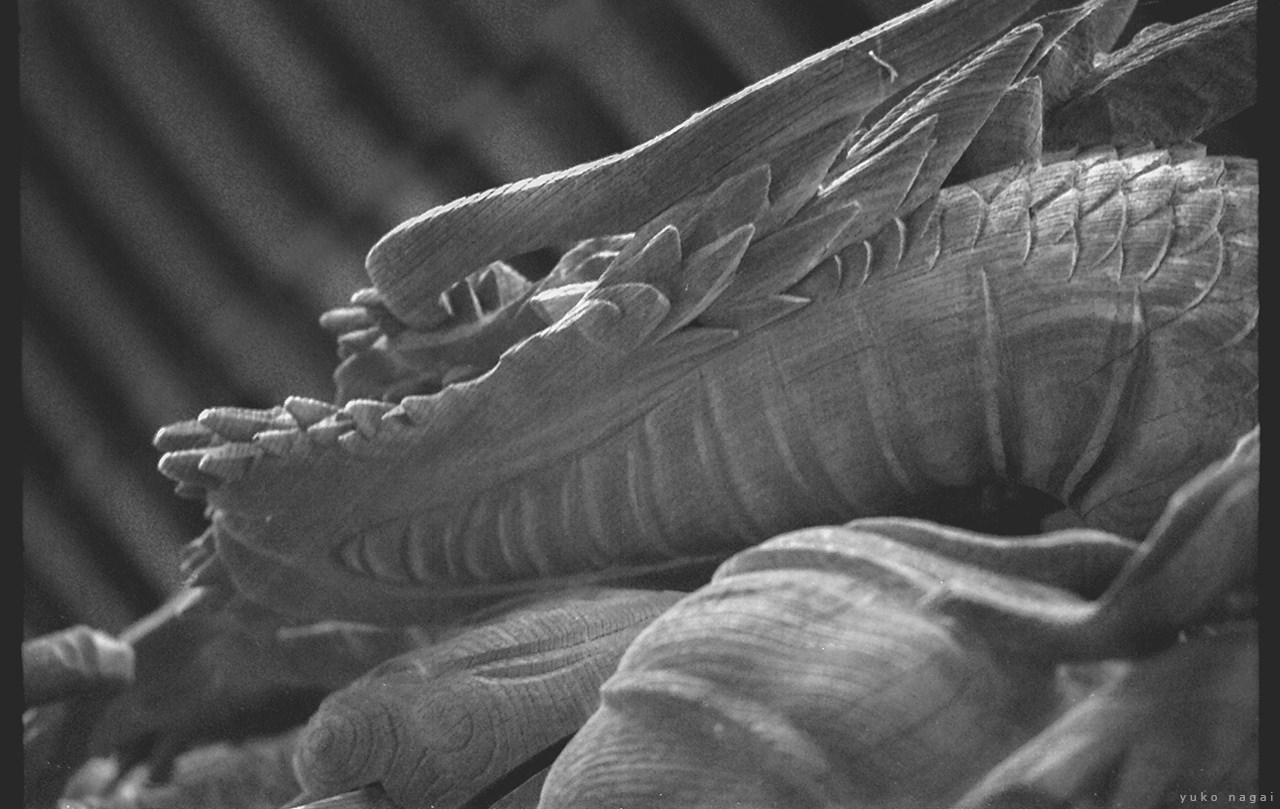 Photographed circa 1998, with a film SLR camera, at a neighborhood shrine in Kawasaki, Japan. These carvings became one of the main inspirations for my dyed dragon series. 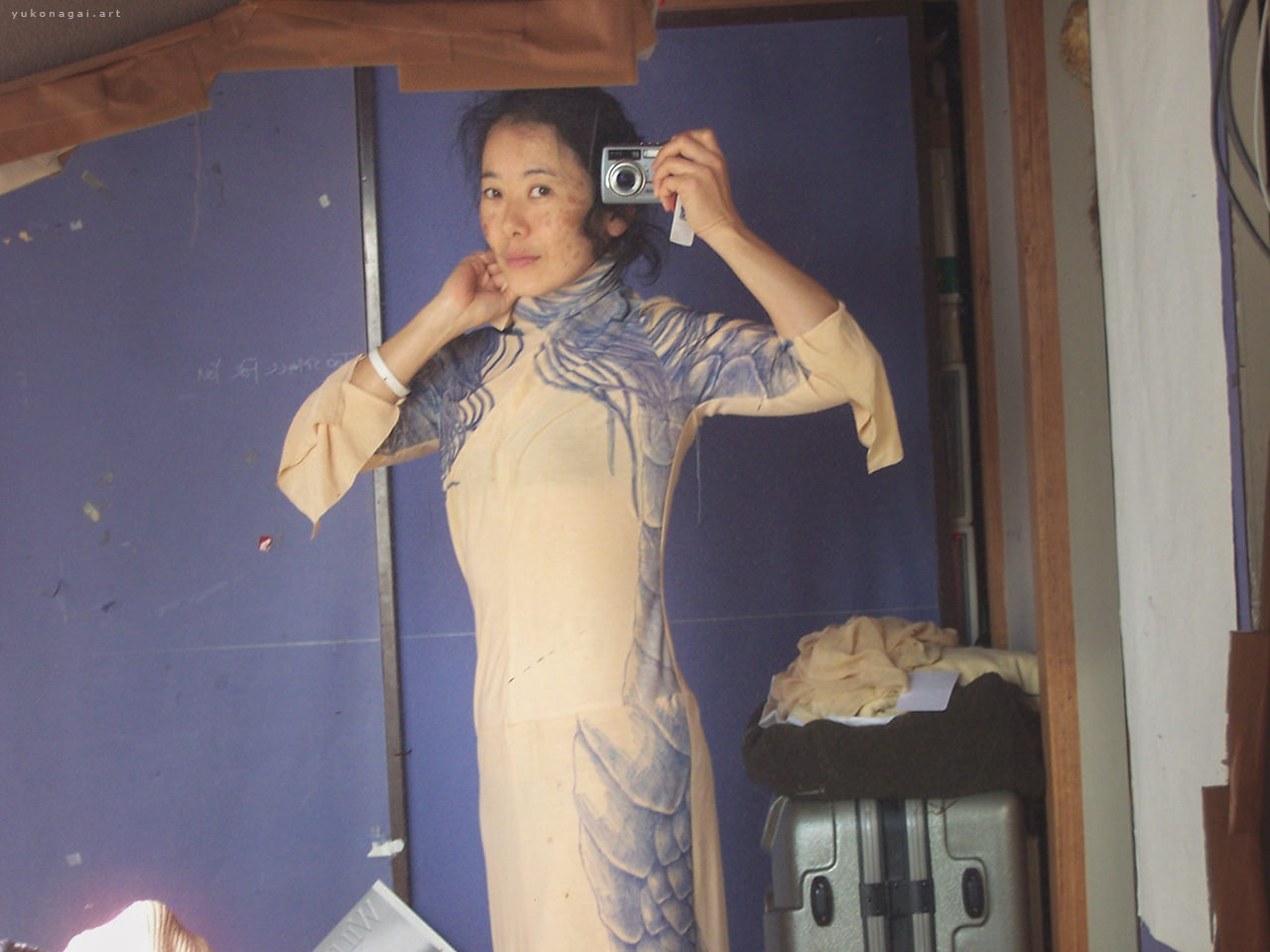 Photo#1: Self Portrait – 31Oct05. A selfie before there was “selfie”, was meant as a snapshot taken for myself, as a record of things going well on the test version of “Dragon Series”, the fragmented / deconstructed dragon, a blueprint roughly drawn with fabric marker, creating “flow” good enough that made me smile.

Originally posted on my website which used to have different URL, sometime in 2006, then on Flickr in 2014. With those uploads I photoshopped/trimmed out the clutter – it was shortly before moving out, but this time you get the full picture – nearly untouched / minimum edits, messy as a part of the story.

Photo#2: Wall Decor – Oct05. Also a snap of my apartment wall.
The drawing is one of the ‘study’ sketches of the dragon below, the print from Redon exhibit I traveled to see in Gifu, and a few impressive leaves I collected, all somehow translated into the piece above.
Honorable mention: I have a special fondness for wire hungers and clothespins. The one on far right facing the pic is from Italy, and so far the most durable. The top three on wire are classic Japanese bamboo pins, they are also very sturdy but I haven’t seen them in stores for some time.

Photo#3: Dragon Carving – photographed circa 1998 at a shrine down the street, where I used to swing by in the morning and practice drawing the dragons even just for 5 minutes, before heading out to catch a commuter train packed like sardines in a glass jar, carrying a purse heavy with books (mostly materials to aid unblocking my creativity), a journal, a sketch book, pens, pencils, a sharpner, swim gear, lunch, a mini disc player…

Now that I am on the subject please allow me to elaborate…..
In 2002-2003 I painted the first dragon dress using the acid dye, spent about a year painting it and messed up over-applying the dye. Couldn’t wash off excess dye. The “failed” piece became the threat, a potential source of air bound dye particles. Had to throw that one out. So disappointed I nearly threw the whole thing out.
(Special shout-out to Mr.S from the dye material store in Tokyo for going out of his way to give me his constructive criticism to the 2003 me nearly in despair, along with all the encouraging know-hows since around 1998.)

What you see in Pic#1 is me working on the second try – the semi-abstraction on the test piece I worn is “flowing”, but when I painted with dye it looked like was drawn with a felt marker, which was not what I was after.
In 2006 finally “got” it the 3rd time (if included the first dress painted with pigment marker on rayon/poly, this would be the 4th try) – the year I worked on 3 pieces – Aqua Dragon Dress 1, Aqua Dragon Dress 2 and Indigo Dragon Top.

Why am I telling you all this – mostly as an encouragement in case it’s needed.
I am getting good at what I do, in other words I like where I am at but it wasn’t done overnight. I had to practice, make lots of mistakes, and while at it hold the vision and believe in it all by myself, simply because no one else could see it, it was my vision.
Believe in what I alone can see and keeping at it thru thick/ thin/ fine/ foul, when what is happening in the current is anywhere near where I wanted to get to. That probably was the hardest part of the whole process. Made me stronger though. And proud, in a way nothing can take that away from me.

“Is your dad Poseidon and is that a pyramid?”

Since early on, I sensed what was there but not visible, a form of floating vibe / energy / emotions.
I was an empath before there was ‘empath’.
What I try to depict is what’s sensed combined with what’s seen. Bring the “hidden” to surface.
…And be hated – worry not tho, I am being funny mostly.

The triangle, bottom-left of me facing the pic, is a calendar falling off – as mentioned above, I was packing to move. Calendar had pictures of wild horses, their mane was what I used to draw dragon’s flowing, um, hair..?

Poseidon’s daughter Lamia, in Greek mythology, was a half-lady, half-snake creature with a sorrowful history. I didn’t know anything about her until someone pointed out to me.
In contrast, I am a common human female down the street. doing her clumsy best in this strange world of ours. 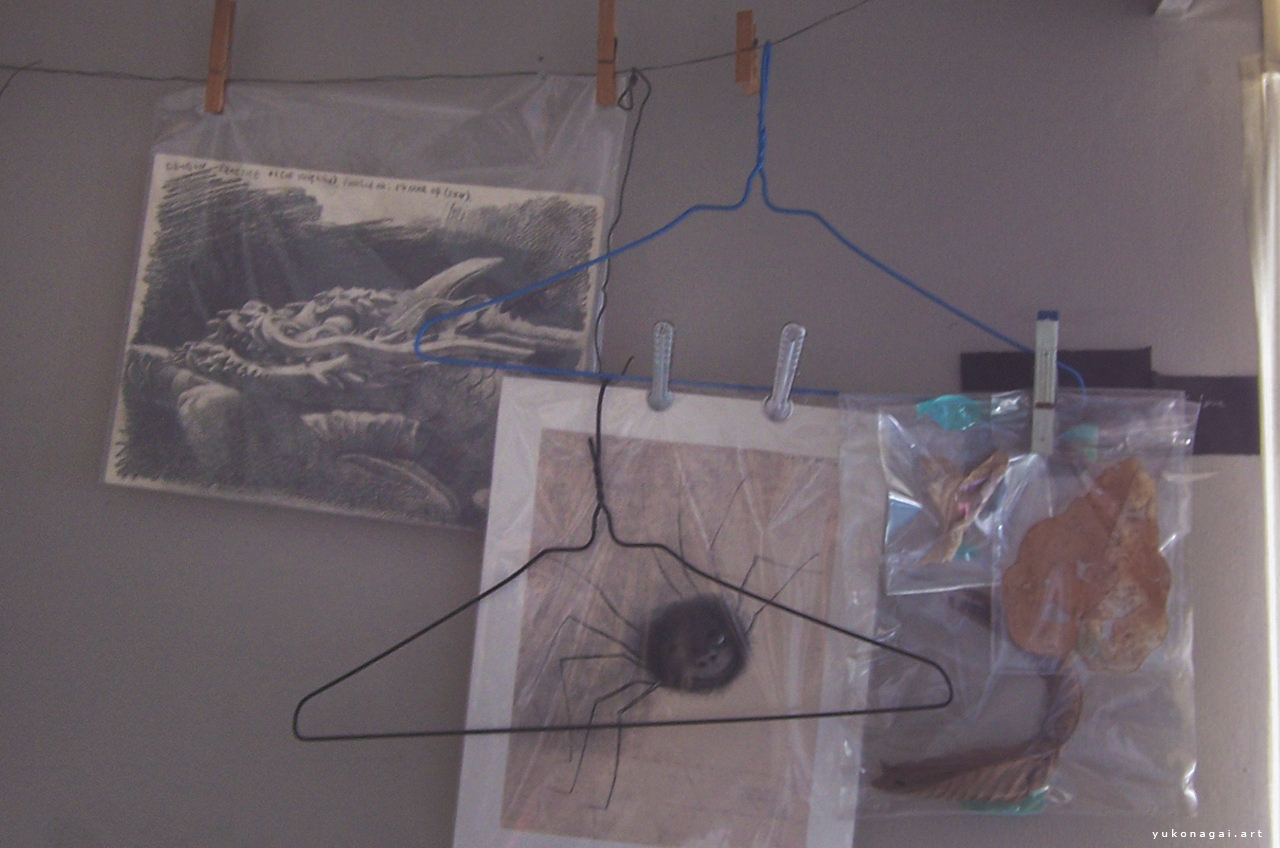 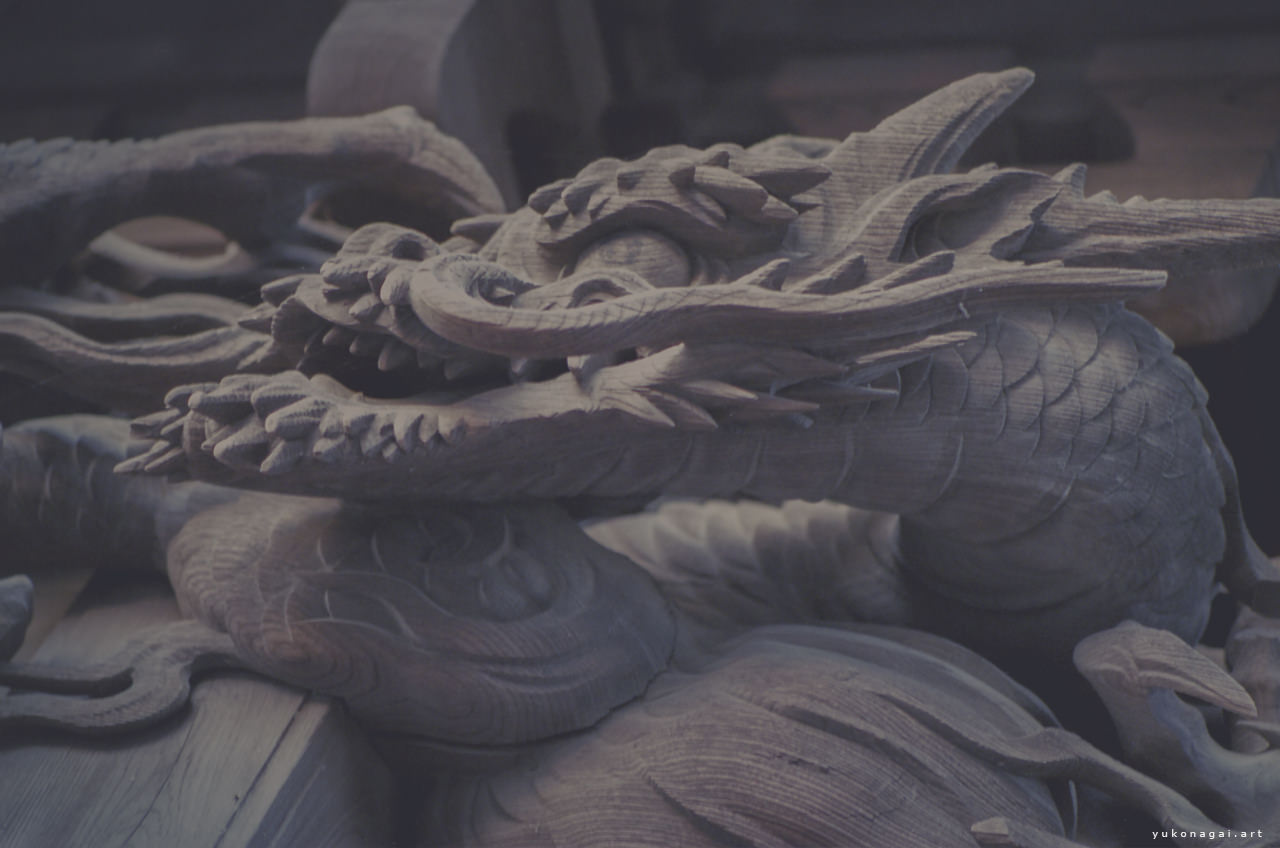